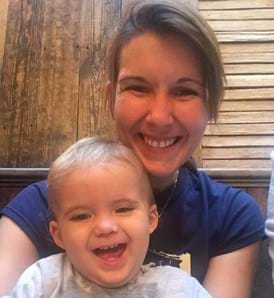 It’s been an amazing Autumn term for Jacob but I have got to be honest, in the last few weeks he’s had a bit of a wobble.  It’s so strange how it can suddenly come on; I remember it happening with Izzy. The difference being this time is that I know it’s just a phase and he will grow out of it but it is still so hard to see your little baby so upset.

So it all started with Jacob refusing to go to Katy for his little swims. Shouting out, throwing his head back and refusing to go under. Where has my super chilled, little angel gone? It’s so funny though when he comes back to me and shoots a dirty look at Katy. I know I shouldn’t laugh but I’ll be honest it does make you feel a little bit chuffed that they love you so much.  Next Jacob just decided he wasn’t doing anything; refused to turn, refused to jump and just wanted to be cuddled all the time. I spent time playing with ducks with him, doing aeroplanes, bubbles, which he was fine doing with just me. The minute we went back into the group he started shouting again!

What is the problem?

So my first theory to this little water wobble is that it’s been a few weeks since starting nursery and Mummy dearest going back to work. Jacob is not the biggest fan of being handed over in the morning at nursery and often has a little cry. So I guess passing him over to Katy in the pool is a very similar activity. Theory number 2 could be the old classic teething; I can definitely see evidence of the big molars appearing, always a rubbish time for little ones. Or could it be theory number 3, we missed a lesson then the week after Katy wasn’t there so we had a different teacher, lots of change for the little man!

I guess the bottom line is we will never know what the problem is. Katy and I have been working together to try different techniques for him. For example, giving him toys to play with in the pool, peek-a-boo games which we play at home, all forms of distraction! Katy also suggested lots more cuddles and reassurance in the pool – building up his confidence again (and it’s always nice to cuddle your baby!). It’s all about patience and perseverance and I know that after a similar experience with Izzy; it doesn’t make it any easier though. It would be so easy to just stop going, learning to swim is tricky at times but the benefits Jacob will get from me sticking at it will be more than worth it.

It’s just such a shame we’ve now had the Christmas holidays because in the last class of term he was beginning to come round and go over to Katy again. Ah well, he’s actually going to a new teacher and pool from January due to the big move up to Kickers, so will have to wait and see what happens with that.   I took him swimming over the holidays with Izzy so hopefully just having fun in the pool with his family allowed him to see the fun side of it again, fingers crossed.

I’ll let you know how it goes!