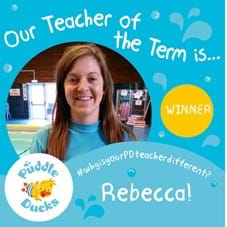 We are delighted to announce the Teacher of the Term for Autumn 2017 is Rebecca!

We received lots of nominations and fantastic comments about all of our teachers, which were lovely to read. Thank you to everyone who took the time to send in a nomination, we really appreciate it.

The winning nomination came from Christian Webb, Dad to Beatrice:

" We have been swimming with Rebecca since Beatrice was 4 weeks old. She has built a brilliant relationship with our daughter and this has shone through during recent weeks. Beatrice had a bout of illness that knocked her independence and water confidence. Rather than this becoming an issue, Rebecca reassured both Beatrice and myself that this would be a passing phase and each week helped her to regain her confidence in the water. Thankfully, Beatrice is back to her happy self and this wouldn't have been possible without Rebecca's efforts. Within these short 30 minute sessions, it is so pleasing that she takes the time to build a relationship with each child and this reflects in the children's learning and enjoyment of the water".

Thanks to Jackie from our locally supported charity Team Verrico, who had the difficult task of choosing the winning nomination!

Rebecca will now be entered in to the national Teacher of the Term competition, so we will keep our fingers crossed!