Lisa tells us about how she and her son battled with 'Water Nerves'... and how they made their way through it!

Lisa has been coming to our Puddle Ducks classes since she fell pregnant with Ronnie, coming to our Aquanatal classes at DW Fitness in Poole after becoming one of our very own Puddle Ducks teachers. Since then Ronnie has worked his way through our program and is now in our Dabblers classes and has recently achieved his 5 meter award, and is already on his way to his 10 meter award! We are so proud of him! 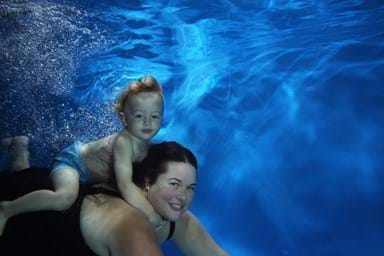 "Ronnie was in dippers about a year I think which is quite a long time. Literally, the night he turned three he decided he hated swimming and wouldn't do anything, he suddenly got really really clingy.It became such a chore bringing him swimming and trying to make it enjoyable and be enthusiastic but it was hard work when he cried the whole time and wouldn't do simple things like jump in independently when he had been perfectly happy doing that for months!

There was no apparent reason for this wobble or any 'incident'. There was no change of teacher or pool but we were packing up to move house so although it seemed irrelevant maybe this had unsettled him. It was very frustrating for us because we knew he was able to do the activities before this but he clinged on to us like he was genuinely really scared of something. 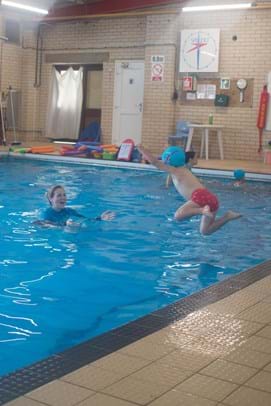 It wasn't fun but we knew we had to battle on through. It lasted exactly 3 months and he came out the other side even better than before it started. Ronnie is now 3 years 8 months old and he is so confident and loves every second in the water. Achieving his 5m in his first few weeks of his Dabblers class was so great for him, and he’s already heading towards his 10m. Children all go through this at some point in their swimming journey and you just have to keep it up and wait for them to get through it. Don't give up!"