When Teacher Lou told the Team her plans to swim the Channel we knew she had got exactly what it takes to complete this epic challenge....

Team Zebra are a group of six female swimmers who swam the English Channel as a relay team on July 12th 2022, raising money for the charity Aspire.

We would like to say a massive congratulations to the Team Zebra Channel Relay team who swam to France in 14 hours 11 minutes, so far raising over £20,400! 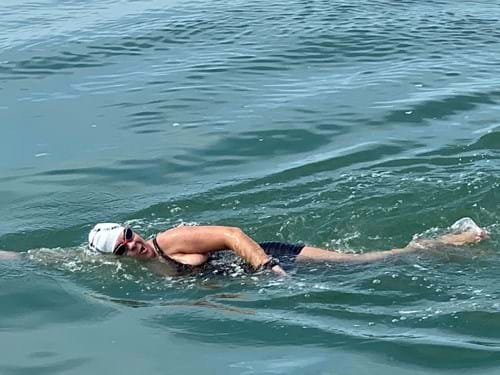 My friend Virginia first suggested swimming the channel as a relay team way back in Summer 2020, after we had just swam Lake Coniston from end to end.  We slowly pondered and gathered our team of 6 together, with the team being finalised in July 2021.  Some of the group already knew each other, but the main link was that we all swim at New Bath Hotel Lido in Matlock Bath.  The team was confirmed as :  Virginia (our oldest member, driving force and Lifeguard at NBH), Sarah (a primary school maths teacher), Claire (a school Business Manager), Su (an Occupational Therapist who is also my sister), Lauren (a cafe owner) and myself (a Puddle Ducks Baby and Pre-School teacher).  Aspire's theme for this year was "African Animals" and we were allocated the name Team Zebra - which was excellent - none of us wanted to be hippos!  We were also given the swim window for our crossing attempt of 10th-17th August.

We all did lots of training separately and met up for training sessions too.  Some of us trained through the winter at NBH in skins (no wetsuit), where the temperature dropped to 15 degrees, some dipped in rivers and some trained in lakes wearing wetsuits.  We chose to swim to arrange money for Aspire, as they are a fantastic charity, offered amazing training opportunities and they are also very experienced at arranging Channel crossings .  We had to each commit to raising £1750 for Aspire, with our total as a team set at a minimum of £10,500.  We have been phenomenally fortunate that so many different people supported us with our fundraising - a huge amount was raised by selling cake to the swimmers at NBH (approximately £8,000).  I was also very fortunate to be chosen by Derbyshire Community Male Voice Choir (who I am the accompanist for) as their charity for their 2021-22 concert season, and received nearly £1,000 from them towards my target.  Lots of support from friends, family and colleagues too, who all donated and supported us extremely generously.

We took part in 3 training weekends in Dover in 2022 - one in May, one in June and one in July.  During these weekends we had the opportunity to do lots of swimming in Dover Harbour, a night swim (at 2am), an early morning swim (at 6am), a couple of swims in a very choppy sea at Ramsgate, and a day trip out on our boat to practice swimming way out at sea and our relay takeovers.  These weekends were carefully planned and structured by Aspired, supported by Dover Channel Training.  We did a lot of swimming in short periods of time during these weekends - the July weekend we swam over 8 miles in 25 hours.  These weekends also allowed us to build a close relationship with our boat leader Laura, as well as some members of other teams.

We also had to do qualifying swims, to prove that we were able to swim in cold water for long periods of time.  This involved swimming for 90, getting out for 60-90 minutes, then getting back in and swimming for another 60 minutes.  All at below 16 degrees, and wearing only a regular swimming costume, hat and goggles (and ear plugs if required).  Myself and my sister did our qualifying swims at Stoney Cove in Leicester on 4th June, where the temperature was 15 degrees.

All was good, and we had plenty of time for more training after our final training weekend in Dover the first weekend of July - or so we thought.  We were contacted by Andrew from Aspire at teatime on Saturday 9th June, offering us the chance to go early because of the fantastic weather conditions.  The date being offered was Tuesday 12th July - 3 days away!  After a serious amount of discussion, and phone calls to various bosses and colleagues, we accepted the date.  And then we got panicky!  We were really doing this!  We travelled down to Dover on Monday afternoon, and enjoyed our traditional team meal of fish and chips/chicken and chips along the seafront.  Then off to bed for an early night, and an attempt to get some sleep.

We were up at 5.30am on Tuesday morning - a bit of breakfast for those swimming early on, something a bit more substantial for those swimming later.  We left the hotel at 6.30am, laden with swimming gear, suntan lotion and lots of food! We boarded our boat "High Hopes", greeted by our pilots Simon and Maz, and headed round to Samphire Hoe for our starting point.  Our first swimmer was Lauren - when the boat was fairly close to the beach, she had to jump in and swim to land.  Once she had cleared the water, the klaxon sounded and she re-entered the water and started to swim.  We then proceeded to work our way through the team - Sarah followed Lauren in, then me, Virginia, Claire and Su.  Conditions were perfect - no wind, very calm sea and sunshine!  On board the boat were also our boat leader Laura, and two officials from the CSPA, making sure that we followed all of the rules and regulations.  At each takeover point there was a count down of 10 seconds, then the new swimmer had to jump in behind the finishing swimmer, without making any physical contact, swim past them and then wait until they were told to swim.  Then put your head down and go.  We saw lots of interesting wildlife including a seal (in Dover Harbour), some porpoises, jumping fish, jellyfish and lots of seagulls.  We also saw a great many massive boats - ferries, cruisers and commercial boats.  Our crossing went smoothly, and we could see France getting nearer and nearer, and Dover slowly getting further away.  We all swam hard, but had no idea how well we were doing whilst actually swimming, as the only point of reference was the boat.  Lots of mind games going on during an hour of swimming!

Once we had gone through the whole team, we started again.  We all enjoyed our second swims much more, as our nerves had started to settle by that time.  My second swim was particularly more enjoyable because I didn't get "jellyfished" like I did on my first swim.  The pilot told us to all work hard on our second swims, as going well at that point was the difference between catching the tide right or missing it and the journey taking an extra 4 or 5 hours.  We all gave it everything!

As darkness fell, France was tantalisingly close, but we were told that we weren't as close as it appeared because of the tide.  For Sarah's 3rd swim, she had to wear a flashing green light on her head and a constant green light on the back of her costume.  Halfway through her swim, Simon (our pilot) told me that either Sarah would land, or the next swimmer would (which was me!)  We all cheered Sarah along, and with 10 minutes left of her hour of swimming, we were 1k away from land.  So the honour of landing in France fell to me - I jumped in, and the water felt so warm! The boat accompanied me as far as was safe, and then shone a spotlight on to the beach - I was told to swim for land!  I was all on my own, so put my head down and went for it.  I couldn't stop smiling as I was swimming, as I knew that we were going to make it to France!  It was really difficult to gauge how far from land I was, as it was pitch black except for the light shone on to the beach from the boat.  So I kept swimming until I bumped my knee on a rock, then stood up and walked on to the beach.  It was such an amazing feeling - I turned round to the boat and waved my arm, the finishing klaxon sounded, followed by screams and cheers from my teammates on the boat.  The rest of the team, including our boat leader Laura, were then able to jump in and swim up to the beach and join me on dry land in France.  Lots of hugs and screams, and some photos, then we each found a souvenir pebble on the beach.  Then we all swam back to the boat, boarded and then we set off back to England.  Cue the popping open of celebratory champagne, a substantial amount of which was spilled on the boat!  Lots of photos and hugs, then messages sent back to our families back in England.  The boat journey back took around 2.5 hours, which passed by very quickly aided by the champagne, lots of nibbles and laughter.  Our time was 14 hours and 11 minutes - this was faster than any of us had dreamed of, but in all honesty all we ever want to do was succeed in getting to France.  When we arrived back in Dover, Simon and Maz gave us all a printout of our route across the channel, which is an amazing thing to have.  Then we headed back to the hotel to get a few hours sleep.

Wednesday morning, we were all tired but buzzing, and headed in to Dover for a celebratory breakfast, before beginning the long drive back to Derbyshire, eager to see our families.

How can I sum up such an amazing experience?  I don't know really, but friendship, determination, support, fun and a lot of hard work is a good place to start.  We are all so fortunate to have been supported so much by our families, friends and colleagues.  We all have jobs, and other commitments, and everyone has been so understanding and supportive.  And now, if I can just get rid of the rocking feeling that I still have, I'll start planning my next adventure - but nothing will ever top this.  It was all just perfect!