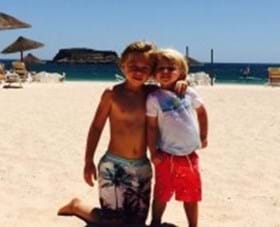 Seven year old Puddle Ducks swimmer, Oliver Johnson-Platt came to the rescue of his baby brother, when he suddenly jumped in the pool whilst on holiday in Portugal.

Oliver Johnson-Platt, who lives in Tarporley was on holiday in Portugal, when his two year old brother suddenly jumped in the main pool. Mum Sarah describes the event, “We were on the first day of our holiday and we had only been in the water for an hour or so. Oliver was in the main pool and his two year old brother Gabriel was happily playing with the buckets & watering cans in the very shallow baby pool. I was sat in between the two pools watching them both as my husband had gone to the hotel reception to collect our car. Whilst I was looking over at Oliver in the big pool, out of the corner of my eye I saw Gabriel running towards the main pool. I jumped up and started to run towards him but at the same time Oliver had seen what was about to happen and swam like his life depended on it. At that very moment Gabriel jumped straight into the main pool - Oliver went straight under without even thinking and got hold of him around the waist and brought the two of them to the surface of the water and safely over to the side. It all happened so quickly.”

Oliver is an incredible swimmer and has been swimming with Puddle Ducks Mid Cheshire since 2012. He has been in the Advanced Elite Swim Academy at Delamere for the past two years and has achieved his 100m, Shark 1&2 awards and Rookie lifeguard bronze 1&2 and is currently working towards his bronze 3.

His Puddle Ducks teacher Vicky Walker enthused, “I’m extremely moved and proud of Oliver’s amazing achievement saving his brother from drowning whilst on holiday. It just proves that what we teach every week at Puddle Ducks does actually pay off. Oliver's natural saving instinct kicked in and what he learnt in his class was put to good use to save his little brother. Well done Oliver!”

Mum Sarah added, “I could not be prouder of him and the way he reacted that day. It really showed me how invaluable everything they are taught in the lifesaving lessons at Puddle Ducks are. What a super star!”