Skip to main content
View pages in this section
Congratulations to Rachael who has won our star teacher award! 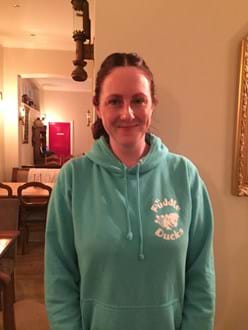 Our independent judge was ten year old Holly who recently graduated from our level six Swim Academy class. Holly chose this nomination as the winning one:
"Every week Beatrice wants to arrive at her lesson early with enthusiasm to find out what fun Rachael has in store and watch Rachael prepare her lesson. During the lesson due to Beatrice's admiration,,Bea always wants to ask questions which Rachael waits patiently to finish despite a fast lesson turn around. As a parent (and past swim coach) watching Rachael manage early swimmers (and their parents!) and their worries with confidence, patience and a firm but kind approach is always warming. Rachael is a true credit to Puddle Ducks, she's welcoming and strives to get the best out of the children she teaches. Her class management is of a high standard and each child is corrected, enthused and encouraged equally. Not easy when surrounded by toddlers!"
Thank you to Holly for being our judge and thank you to Nick (Beatrice's Dad) for taking the time to nominate Rachael :)
Back to Local Team