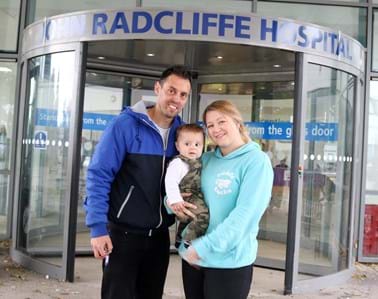 Our very brave teacher, Tash, recently took a leap of faith, all in the name of charity by abseiling down the side of the John Radcliffe Hospital with her husband Ben.

Tash took on the challenge for a very personal reason. Earlier this year her son, Hudson, was diagnosed with meningitis when he was only 3 months old. Her world fell apart at hearing the news, but thankfully Hudson has now made a full recovery.

She explained why they decided to take on the challenge, ‘We were devastated when we heard that our little Hudson had contracted meningitis. During a really difficult time in our lives the John Radcliffe Children’s Hospital was incredible. Everyone who crossed our path was so helpful, friendly and understanding from the moment we got there to the moment we left.’

In particular they found the staff on Robin’s ward, where they stayed with Hudson, were faultless and, as a little thank you to them, Tash and Ben decided to help raise money by doing an abseil down the hospital.

On the day of the abseil the family were thrilled that Hudson was able to be there to support his mum and dad.

Tash added, ‘It was seriously scary, but we were determined to go ahead with the abseil and help to raise both awareness and much needed money for the Oxford Hospitals Charity. We are pleased to say we have currently raised over £500.”

Beccy, our Franchisee, was so impressed with Tash, and delighted that little Hudson is now better and said, ‘In October we are holding our charity pyjama week at ten pools across Oxfordshire, Cirencester and Swindon and we are going to donate all the money we raise to the Oxford Hospitals Charity.’