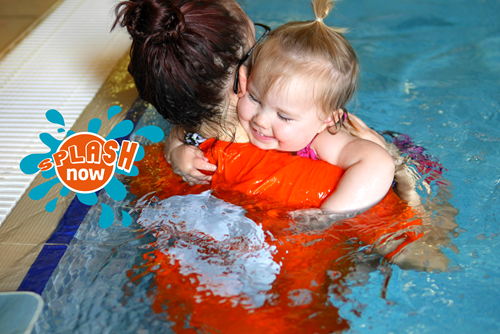 We are pleased to announce that we are supporting the Meningitis Now charity in the launch of a new pre-schoolers’ swim, or splash, UK wide awareness challenge called Splash Now.

Last year our swim teacher, Tash, abseiled down the John Radcliffe Hospital, with her husband, to raise money for the hospital to purchase equipment to detect early signs of meningitis, following their baby son’s recovery from the illness. When Meningitis Now launched their latest campaign, they reached out to Tash.

We will be featured in the promotion of this potentially life-saving initiative, as all the images and video footage being used in the campaign are predominantly of Tash’s son Hudson and his Puddle Ducks classmates, in the pool at Alexandra House in Wroughton, near Swindon.

The Splash Now campaign is a partnership between charity Meningitis Now and the (STA) Swimming Teachers’ Association. Parents and guardians all over the country are being encouraged to join the campaign, by hosting Splash Now challenges to raise money for the charity and awareness of the signs of meningitis.

Hudson contracted meningitis at just three months old but is now fully recovered, healthy and happy, thanks in part to the excellent care he received at John Radcliffe Hospital.

Tash said, “I am honoured to have been asked by Meningitis Now to be a part of this fantastic and important campaign. After the experience that my family went through, I’m passionate about making sure as many people as possible are aware of the signs of meningitis. Splash Now will help that awareness to spread throughout swim schools up and down the country and I couldn’t be happier that Puddle Ducks Oxfordshire's little swimmers are the faces of the campaign.”

“It’s wonderful to see little Hudson loving the water and doing so well, after everything he went through last year. Puddle Ducks hope parents will get involved in the Splash Now event to help raise awareness of the signs and symptoms that could hopefully save a life.”

Launching the event, Meningitis Now’s Community Fundraising Manager, Tracey Lee, said she was sure this would be one of our most popular events.

“Swimming is such a popular way for babies, toddlers and children to have fun, keep fit, and cool down all at the same time, so we thought it would be a great way to also help raise funds,” she said.

“It’s simple and it’s enjoyable and it’s open for everyone – whatever their age or ability”.

One reason Splash Now is so simple is because you can do it in your own time and in your own way. At your local pool, in your back garden, even in the sea during the summer holidays – all you need is some water and some children and let the fun begin!

To get involved with Splash Now, or to learn about the signs and symptoms of meningitis, visit www.meningitisnow.org.